The introduction of tvOS expanded the app and media universes to new possibilities. Possibilities which come with even greater challenges managing, understanding, and acting upon data. More than ever, a data platform becomes imperative to navigate gracefully through a world of dancing information landscapes.

That’s why we’re thrilled to announce the mParticle Apple SDK, a unified SDK for iOS and tvOS development. It’s a powerful instrument to manage your data whether you are developing single or multi-platform apps.

If you are already familiar with iOS you will feel right at home with tvOS, given the number of overlapping features shared between the operating systems. The differences are subtle but necessary due to the different nature of tvOS.

When working on a multi-platform app to run on both iOS and tvOS you can choose to have separate projects one for each OS (which entails duplication of code and a plethora of other challenges), or you can opt to have a single project with two targets, allowing you to share most of the code between the two platforms.

For the rest of this article we will take a look at how the multi-platform sample app was built and how we used the mParticle Apple SDK to define and collect data points from it.

Let’s start by cloning the mParticle Apple SDK from GitHub and taking a look at the project in the Example directory:
>git clone https://github.com/mParticle/mparticle-apple-sdk.git

If you want to see how the apps look like and run, go ahead, select either the iOS_Example or tvOS_Example scheme, build and run. We will wait for you.

Good data management starts with a good data plan or data strategy. For our sample app we want a simple, however comprehensive data strategy:

Our sample app presents a list of titles, each one corresponding to a separate video stream (all video streams are licensed using Creative Commons). Once a title is selected, the respective video stream starts playing.

Since this is a multi-platform app, one of the objectives is to share as much code as possible between the platforms, yet implementing the correct user interface and appropriate interactions for each of them.

Building the App and Implementing the Data Plan

From Xcode we created a project called Example and added two targets: one for iOS and another one for tvOS. 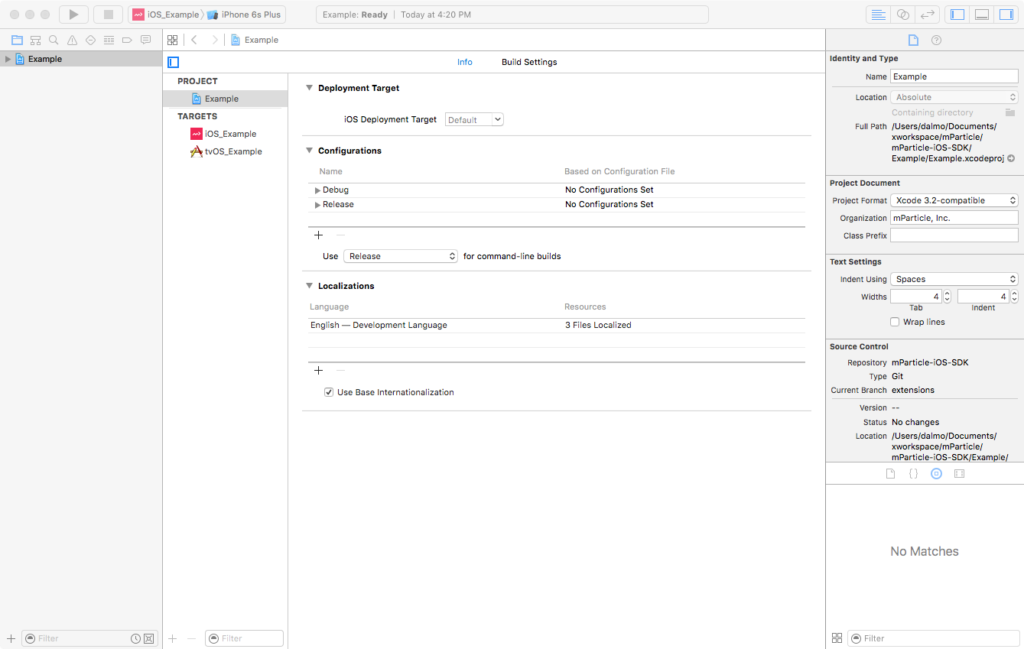 In the tvOS target we needed to inform the Targeted Device Family to be the Apple TV (TARGETED_DEVICE_FAMILY = 3) and whether bitcode is enabled (ENABLE_BITCODE = YES). You can find the configuration under the Build Settings tab in the tvOS_Example target. 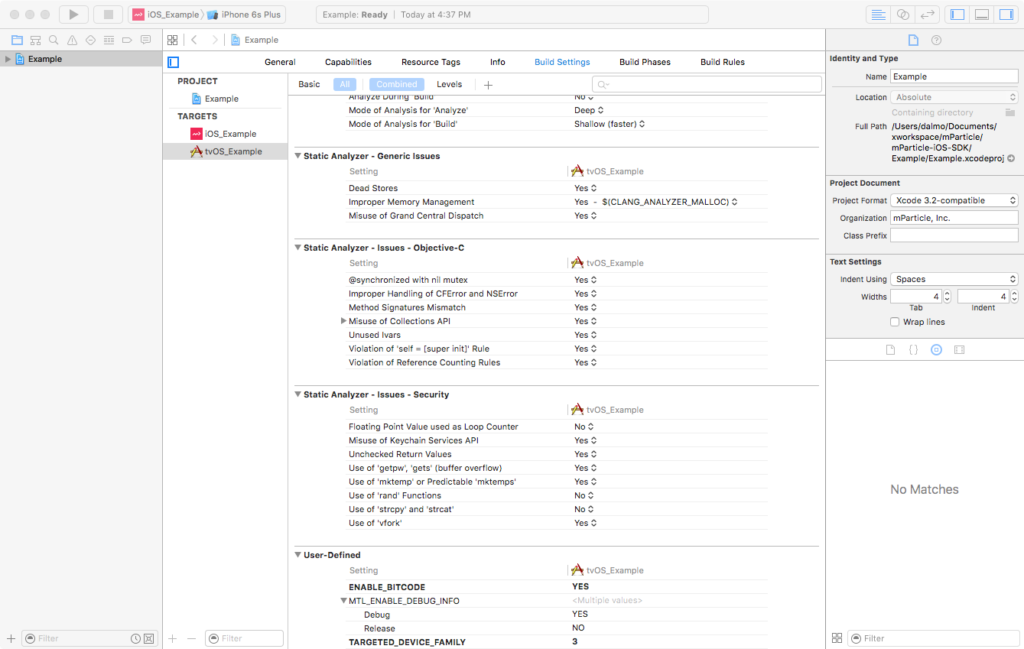 Each target has its own App Delegate and Storyboard. However, they share the View Controller to present the list of available video streams, playback, and manage the data. In each App Delegate we import the mParticle Apple SDK and start it in the application:didFinishLaunchingWithOptions: method. 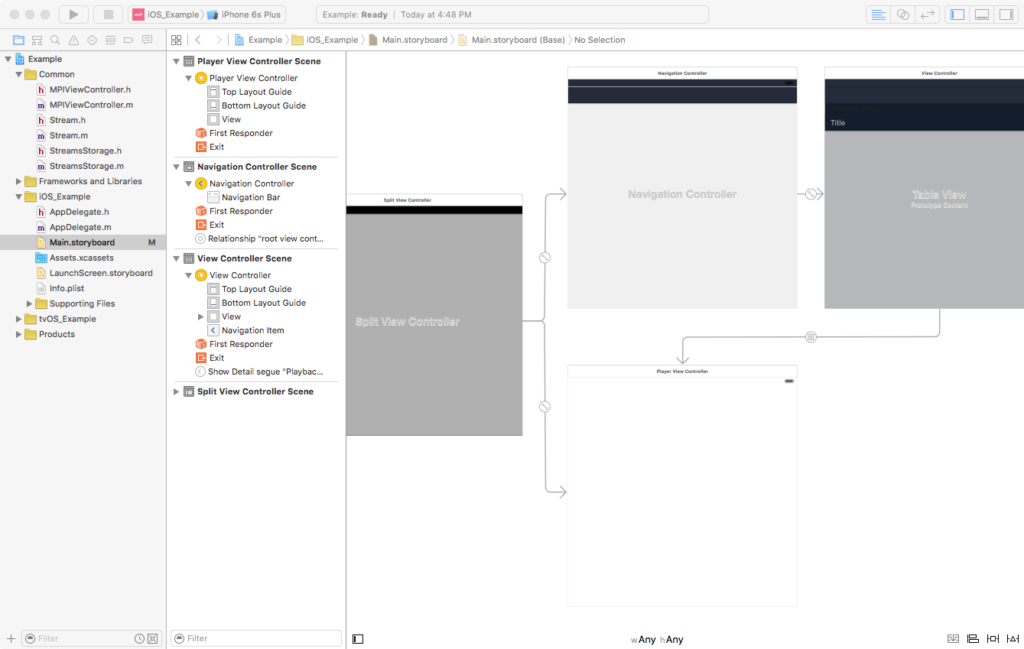 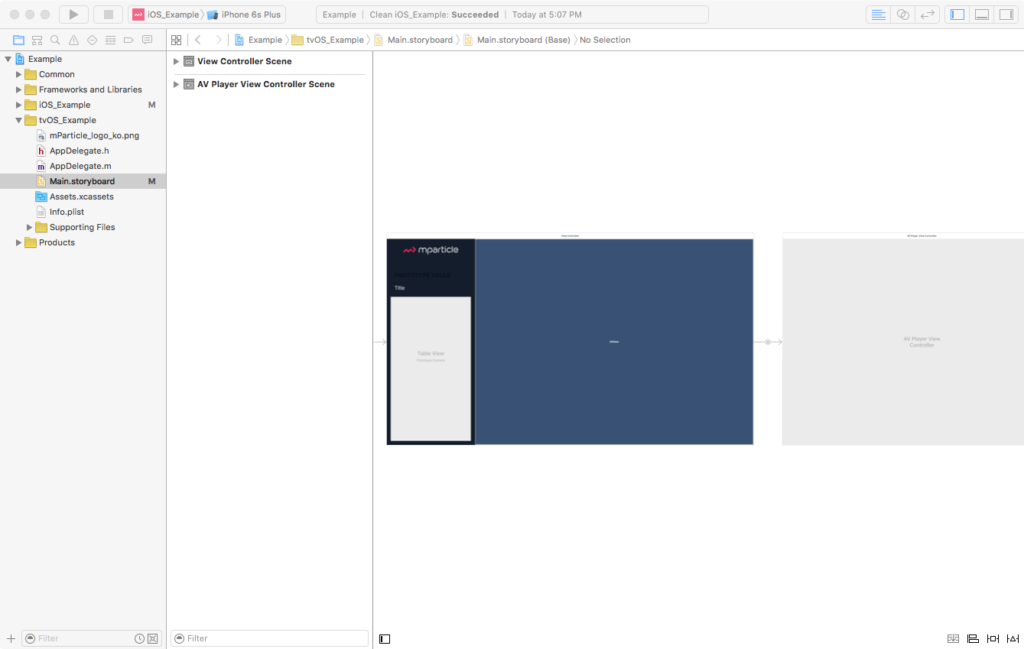 – (void)handleSessionDidBegin:(NSNotification *)notification {
// Once the session start notification has been received, assign an attribute named “Playcount”
// to the current session. This will track how many plays were executed within a session
[[MParticle sharedInstance] setSessionAttribute:@”Playcount” value:@0];
}

// Increments the number of plays in the current session
[mParticle incrementSessionAttribute:@”Playcount” byValue:@1];

The code above show we were able to implement the data plan successfully. In the awakeFromNib method we register to listen to the session did begin notification and handle it in the handleSessionDidBegin: method, where we set a session attribute to count the number of plays within a session.

In the viewDidLoad method we establish the user’s identity and begin a timed event to measure how long it will take for the first video stream to be selected.

In the playStream: method we log an event describing which video stream has been selected, increment the playback counter for both the session and user’s lifetime, and conclude the timed event (if applicable).

Last, but not least, using KVO we log an event reporting when a video is played or paused.

If, like our sample app, your app is also targeting iOS and tvOS in the same Xcode project, you will need to configure your Podfile differently.

# Replace with the name of your Xcode project name
xcodeproj ‘

# Contains a list of all pods which are common among the platforms
def include_common_pods
pod ‘mParticle-Apple-SDK‘, ‘~> 5‘
end

# iOS app
target :phoneApp do
# Replace with the name of the iOS target in your Xcode project
link_with ‘
use_frameworks!
platform :ios, ‘8.0‘
include_common_pods
end

# tvOS app
target :tvApp do
# Replace with the name of the tvOS target in your Xcode project
link_with ‘
use_frameworks!
platform :tvos, ‘9.0‘
include_common_pods
end

In the event your app is targeting only iOS or tvOS, but not both, the Podfile configuration follows the traditional format we are all accustomed with.
use_frameworks!

Watch the Sample Apps in Action

Here you can watch a recording of the example app running on each of the platforms:

We could not have been more excited to share this SDK with you.